August 21, 2014
Alas GSoC 2014 has come to an end. It was a fantastic experience developing and adding support for Indic language layouts for Firefox OS. I did veer quite a bit away from my initial goals after getting feedback from the language community which mostly asked for layout based keyboard. The implementation of the layouts for 14 indic languages have been completed, and I'm happy with the final results. The screenshots for all the 14 languages can be viewed in my previous post . I have also prepared a screencast describing the usage, however, due to poor internet connectivity it is taking too much of time to upload. I'll update this blogpost with the screencast as soon as I get hands to a decent connection. I'd like to thank Swathanthra Malayalam Computing and Mozilla for providing me with this wonderful opportunity and some great Mentors in Santhosh, Anivar, Hrishikesh, Tim and Rudy. Although the GSoC project may be finished, the keyboard has a lot of features to be impro
Post a Comment
Read more

The keyboard layouts for the following languages are now complete : Assamese Bengali Gujarati Hindi Kannada Kashmiri/Kashur Malayalam Marathi Nepali Odia Punjabi Sanskrit Tamil Telugu Most of the layouts are a (heavily) modified version of the Inscript, inspired from the Hindi layout that was present in the Gaia repo. The rest are phonetic based like the Malayalam Lalitha layout and the KaGaPa phonetic layout for Kannada & Telugu. Hindi, Marathi, Kashmiri/Koshur, Nepali and Sanskrit use the same Devanagari based script and layout with some minor variations. With all these layouts, I've achieved the primary goal of Indic language Input support on Firefox OS, but could not yet do with the transliteration based ones. I will be continuing to work on them after finalising and perfecting these layouts using community feedback. All the above layouts are compatible with the Gaia keyboard codebase and can be pushed to the same, which will be done on ad
Post a Comment
Read more

July 16, 2014
Last two weeks, the progress was slow. I'm trying to strike a balance between college schedules now that college has reopened after Summer Vacations. It seems like the decision of taking the Gaia Keyboard app as the base for the 3rd Party app is proving to be a hindrance. Much of the code is not reusable, and refactoring it is taking a lot of time. I'm still unable to register the jqim ime in the /js/ime folder with the initialisation function "init". Due to this, the "click" event does not funtion. Tried it with the bn-Avro ime from Gaia, and it is also not functioning when installed as a third party app. As built-in, the bn-Avro keyboard is working fine. This week I'm aiming to solve this minor hiccup and continue integration with jquery.ime. Some of layout based keyboards are almost finished, and a few more Indian languages left to be completed.
Post a Comment
Read more

Week 4 of GSoC : Community interactions for the Keyboard 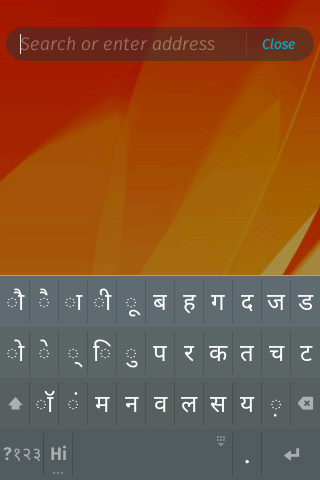 The project is progressing at a good pace and the Indic Firefox OS L10n Sprint has helped me understand the needs and requirements of 13 Indian locales which participated in the sprint. There was almost a unanimous feedback that the Inscript layouts don't make any sense in the mobile space since it takes too many keys and ends up increasing the "Fat Finger Error" to a new level , even if you have tiny fingers.  I showed the highly modified Inscript-like layout for Hindi (shown below), which the the Telugu team liked a lot. Mr Veeven from the Telugu L10n team was rooting for such a keyboard for Telugu. I did try experimenting with such layouts, but the 'extra' vowels in South Indian languages are posing a problem. Hindi Gujarati Most of the language communities were in favour of phonetic keyboards, like the Odia Lekhani input, the Malayalam Lalitha layout and the KaGaPa phonetic layouts for Kannada, Telugu etc. The phonetic based
Post a Comment
Read more

I was faced with a few issues, but am progressing steadily with my GSoC project . The KeyboardIME API of Firefox OS has landed in version 2.0 and my project needs the API for its functioning. The structure of the Keyboard is based on the Built-in Keyboard App in Gaia . This has two advantages, one is that it will give a quick bootstrap for the project with the same look and feel of the default keyboard in Firefox OS and the second is that apart from being a 3rd party app for now, the code can easily be merged with the Gaia Keyboard later on. I faced a few hiccups in setting up the development environment because the App Manager keeps closing down the  Developer tools when the Keyboard pops out of view again and again. This happens both with the simulator and on the test device, Geeksphone Keon, leaving me clueless on what's going on in the console. Perhaps I'll need to ask my mentors for help with this. Meanwhile, I set up another test environment, this time in Firefox N
Post a Comment
Read more

A talk on "Hacking with Open Data" at AngelHack Kochi 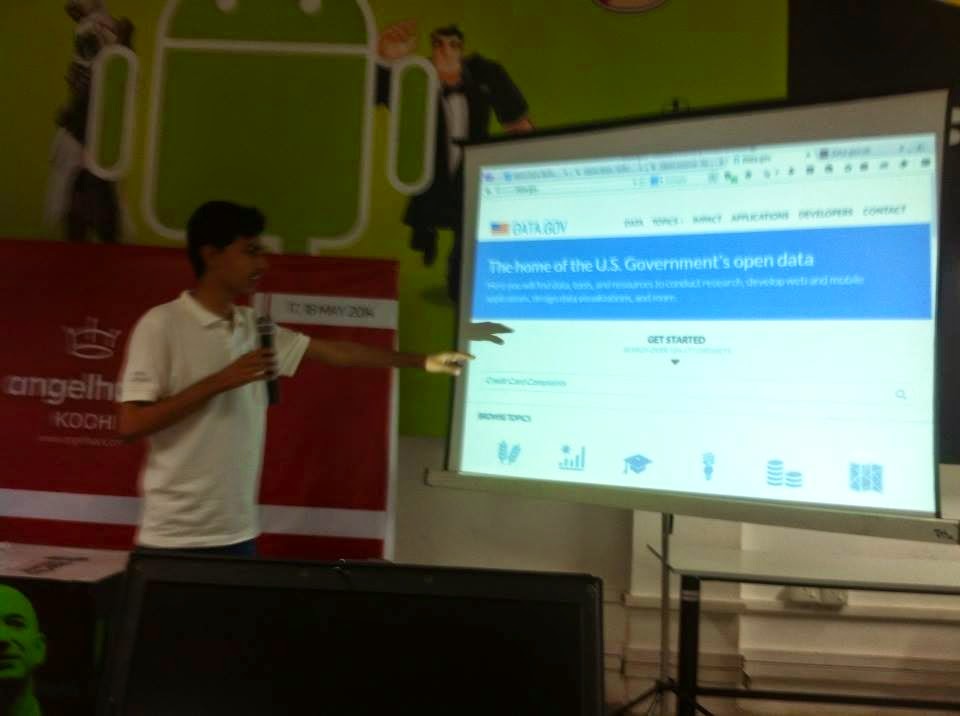 My first introduction to "Open Data" was during the  Wiki Sangamotsav  at Allapuzha, which took place last year in December. I attended it as part of Mozilla Kerala Community and one of the sessions there was regarding Open Data taken by Arun Ravi It was his talk that motivated me to explore more about the possibilities with Open Data which opened up the ideas of socially relevant apps using data from portals like  data.gov.in . While I was hacking away at home, toying with such ideas over the last few months (although, I've got to say, I have nothing to show since none of them are complete yet!), I got a speaker invite from the organisers of AngelHack in Kochi. I felt privileged to get an opportunity to take a session at AngelHack Kochi at Startup Village and decided to take a topic that I'd never talked on before : "Hacking with Open Data". Since I was too lazy to create a presentation from scratch, I decided not to use any slides,  relying solely
2 comments
Read more

May 20, 2014
The GSOC coding period has begun and I had a Kickstart meeting yesterday with my mentors. I'm in a lucky position to have mentors from 2 different Open Source organisations! Anivar, Santhosh and Hrishikesh are the main mentors from Swathanthra Malayalam Computing, which is my mentoring organisation. Since my project involves development of a Keyboard IME for Firefox OS, Tim, Rudy and Arky from Mozilla will also be helping me out with issues specific to the Firefox OS platform. In yesterday's hangout meeting, it was decided that the project would be better off as an Open Source Third Party application, submitted to the Firefox OS Marketplace. The mentors at Mozilla pointed out that this would be advantageous over a built-in gaia keyboard because there would be no delays in implementation approvals from the UI/UX team of Firefox OS, especially since GSOC has strict timelines. Moreover, the country specific manufacturers can bundle the required Keyboards as required. Alt
Post a Comment
Read more
More posts